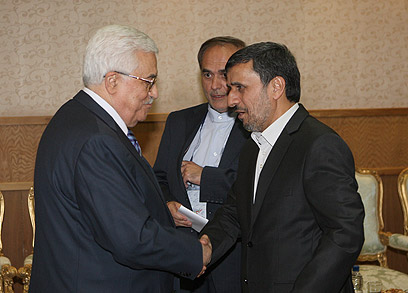 Meeting with Palestinian President Abbas on sidelines of NAM summit, Iran’s president invites all Palestinian factions to meet in Tehran to discuss reconciliation.

An official statement from the Iranian president’s office noted that Ahmadinejad said that the Islamic Republic of Iran is willing to provide any assistance to the Palestinians in a bid to reach national reconciliation.

In his remarks the Iranian president pointed out that “the Islamic Republic of Iran is the only country that has never recognized the Zionist regime and it believes that the Zionists are occupiers who kill the Palestinians by imposing their presence in the region.”

Ahmadinejad added: “The Islamic Republic of Iran has always announced that Palestine belongs to all Palestinians and it is our belief that the Palestinians themselves should determine their fate.

UN Secretary General Ban Ki-Moon was present at the speech and later said “I strongly reject threats by any member state to destroy another or outrageous attempts to deny historical facts such as the Holocaust,” Ban said.

“Claiming that Israel does not have the right to exist or describing it in racist terms is not only wrong but undermines the very principle we all have pledged to uphold,” he added.