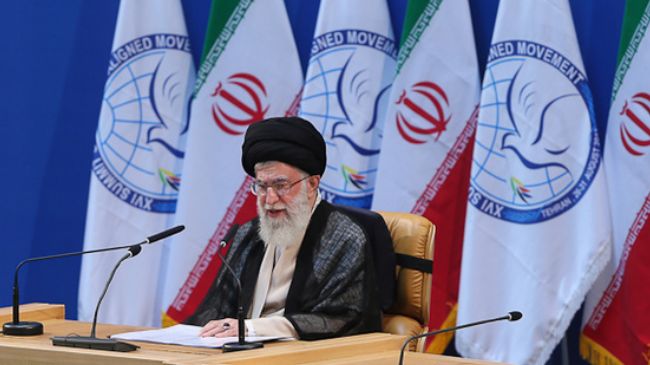 “Iran considers using nuclear, chemical and other similar kinds of weapons a grave and unforgivable sin. We proposed the motto of a Middle East free of nuclear weapons and we are committed to it,” Ayatollah Seyyed Ali Khamenei said during an inaugural speech to the 16th Non-Aligned Movement (NAM) summit in Tehran on Thursday.

“This does not mean forgoing the right to peaceful use of nuclear energy and producing nuclear fuel. According to international law, all nations are entitled to the peaceful use of this energy,” Ayatollah Khamenei added.

“I reiterate that Iran has never been after nuclear weapons, and it will also never give up its nation’s right to peaceful use of nuclear energy,” the Leader stated.

The Iranian president said the reason that sustainable peace and humane ideals have remained unrealizaed must be found in the ideas and actions of the global management.

Ahmadinejad added that monopolism and hegemony have been the two main characteristics of the world management over the past two decades.

In another part of the summit, Egyptian President Mohamed Morsi said many of the NAM member states are facing internal and foreign dangers.

Morsi called for reforming the structure of the UN Security Council, saying that the UNSC must be able to address the international crises.

“Veto right must not become an obstacle on the way of achieving resolutions for international crises.”

Morsi’s trip to Tehran was the first such visit by an Egyptian president since Iran and Egypt severed ties more than 30 years ago after Cairo signed the 1978 Camp David Accord with the Israeli regime and offered asylum to the deposed Iranian dictator, Mohammad Reza Pahlavi.

Referring to unrest in Syria, Ban warned that this crisis could lead to civil war and those who supply each side of the crisis with weapons are courting disaster.

The UN chief called on Iran to alley the concerns of the international community over its nuclear program by taking necessary measures and increasing cooperation with the International Atomic Energy Agency.

Ban also asked Iran to find a diplomatic solution for the impasse over its nuclear program with the cooperation of the P5+1.

He also asked all sides to refrain from making threatening remarks because violence breed violence and will soon lead to bloodshed.

More than 100 countries are partaking in the NAM summit, which kicked off at the expert level in Tehran on Sunday.

NAM, an international organization with 120 member states, is considered as not formally aligned with or against any major power bloc. It represents nearly two-thirds of the UN members.