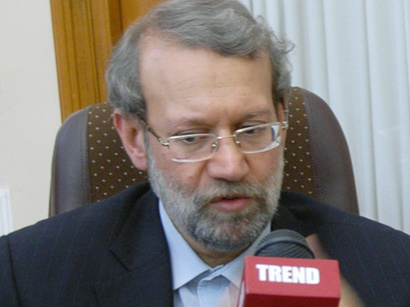 Larijani during a meeting with UN General Secretary Ban Ki-moon said that Iran always supports “democracy” in the region, everybody can see this fact in Iran’s position in the events in Libya and Egypt, but some regional and powerful countries don’t want to allow a democratization process in Syria.

Larijani called on Ban Ki-moon to pay more attention and accelerate his activity in Bahrain issue and support Bahraini peoples’ demand for “democracy and voting rights”.

Ban Ki-moon also told a journalist at Tehran’s airport that he will discuss the Syrian crisis issue with Iran as well.

The 16th summit of the NAM member states kicked off in the Iranian capital Tehran, on Sunday.

According to Iran official statements, representatives from 120 countries including 50 high level officials such as presidents, prime ministers and vice-presidents will participate at the NAM summit. The heads meeting will be held on Thursday.

NAM, an international organisation with 120-member states and considered as not formally aligned with or against any major power bloc.