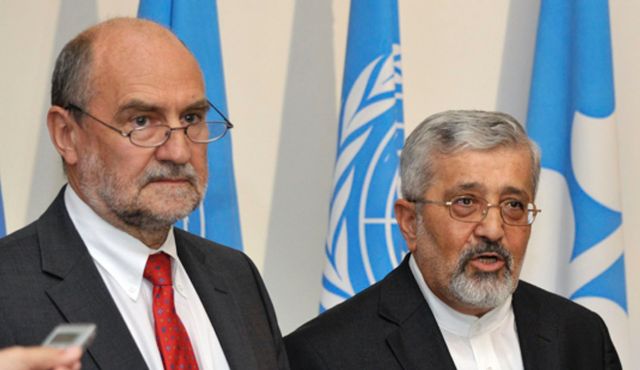 Israel believes the report backs up claims that Tehran has sped up its nuclear project, while the White House insists that findings don’t change the working assumption that there is still time to resolve the crisis diplomatically.

Israel and the United States are split over the significance of a new International Atomic Energy Agency report expected to accuse Iran of installing hundreds of new centrifuges at its underground enrichment facility near Qom.

Israel believes that the IAEA report, due to be published this week, backs up claims that Tehran has accelerated its nuclear project. The White House, however, insists that the findings do nothing to alter the working assumption that there is still time to resolve the crisis diplomatically.

The new centrifuges are thought to be capable of enriching uranium to a level higher than the 20 percent needed for research purposes.

Prime Minister Benjamin Netanyahu, who met on Friday in Jerusalem with U.S. Congressmen Mike Rogers, who heads the House Permanent Select Committee on Intelligence, said that the new information contained in the soon-to-be-released report is “further proof that Iran is galloping toward obtaining nuclear capability and that it continues to ignore the demands of the international community.”

In contrast to Netanyahu’s unequivocal interpretation of the new IAEA report, the White House was more circumspect. Speaking to the New York Times, White House spokesman Tommy Vietor said that “there is time and space” for a diplomatic solution to the Iranian nuclear crisis.

Another senior American official, speaking on condition of anonymity, told the New York Times that the new information contained in the IAEA report is “not a game-changer.”

According to the official, while it is true that Iran has increased the rate at which it is enriching uranium to a level of 20 percent, any move to enrich uranium to a level of 90 percent – the level needed for military purposes – “would not be a quiet affair.” The official added that “the IAEA is in the facility regularly and they would detect a move” to build a weapon.

Over the weekend, representatives of the IAEA met with Iranian officials to discuss a demand to allow United Nations inspectors to visit the Parchin facility. Iran has been accused of researching and developing its military nuclear project at Parchin. This weekend’s contacts – which come after a two-month hiatus – ended without agreement and without a date being set for the next round of negotiations.

The Institute for Science and International Security said the tarp at the Parchin military complex might be an attempt to conceal alleged clean-up work there at a time when Iran is under growing international pressure to open up its disputed nuclear program to scrutiny.

In recent months, Western diplomats have cited satellite pictures showing extensive sanitization efforts at the site in what they say is an apparent attempt to remove any evidence of illicit nuclear activity.

Iran, which denies Western allegations that it is seeking a nuclear weapon capability, says Parchin is a conventional military facility and has dismissed allegations about it as “ridiculous.”