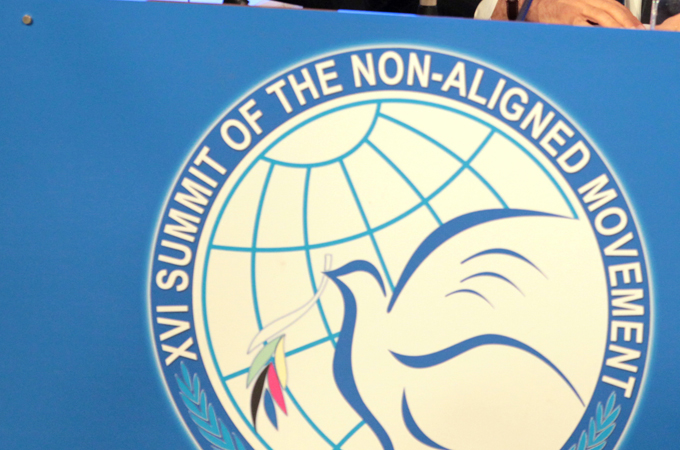 TEHRAN, Iran –  Iran opened a world gathering of self-described nonaligned nations Sunday with a slap at the U.N. Security Council and an appeal to rid the world of nuclear weapons even as Tehran faces Western suspicions that it is seeking its own atomic arms.

Iran seeks to use the weeklong gathering — capped by a two-day summit of various leaders — as a showcase of its global ties and efforts to challenge the influence of the West and its allies. Among those expected to attend include U.N. Secretary-General Ban Ki-moon and the prime minister of India, Manmohan Singh, whose nation remains an important Iranian oil customer as Tehran battles Western sanctions over its nuclear program.

The 120-nation Non-Aligned Movement, a holdover from the Cold War’s pull between East and West, is also seen by Iran and others as an alternative forum for current world discussions. Iran says it plans talks on a peace plan to end Syria’s civil war, but no rebel factions will attend because of Tehran’s close bonds with Bashar Assad’s regime.

Iranian Foreign Minister Ali Akbar Salehi opened the gathering by noting commitment to a previous goal from the nonaligned group, known as NAM, to remove the world’s nuclear arsenals within 13 years.

“We believe that the timetable for ultimate removal of nuclear weapons by 2025, which was proposed by NAM, will only be realized if we follow it up decisively,” he told delegates.

Iran insists it does not seek nuclear weapons. But the U.S. and allies fear that Tehran’s uranium enrichment could eventually lead to warhead-level material, and have imposed tighter sanctions on Iran’s banking and oil exports in attempt to wring concessions. Israel has said that it would consider military options if diplomacy and economic pressures fail to curb Iran’s nuclear ambitions.

Salehi criticized Israel for remaining outside the U.N. main treaty governing the spread of nuclear technology. Israel refused to discuss the full range of its military capabilities, but it is widely believed to have a nuclear arsenal.

Salehi also complained about the perception of the “falling” clout of the U.N.’s general membership at the expense of the “rising power of the U.N. Security Council,” which includes the U.S., Britain, France, Russia and China.

“Creating a more democratic Security Council should be considered an important part of U.N. reforms,” Salehi told the gathering.

Even before the first session got under way, however, a potential dispute brewed over Palestinian envoys.

Iranian officials said a political leader of Tehran’s ally Hamas has not been invited to this week’s meeting of nonaligned nations in Tehran, but Hamas insisted its Prime Minister Ismail Haniyeh will attend.