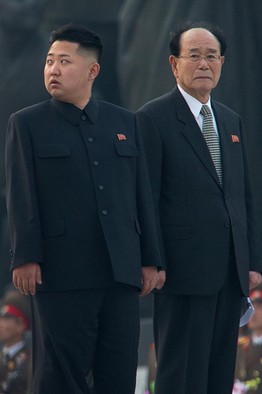 But it appeared to be a misunderstanding over the role of Kim Yong Nam, the poor old guy who has the biggest title in the North’s government but has always been second fiddle to the leader from the family of Kim Il Sung.

The German news agency DPA, citing an Iranian news website Tabnak, got the report going around the world that Kim Jong Eun would be attending the Non-Aligned Movement summit next week in Tehran.

If true, it would mark the first overseas trip for the young Kim. And the destination would raise eyebrows, if not alarms, in the U.S. and other countries that have been trying to get Iran and North Korea to curtail their pursuit of nuclear weapons, something Iran denies.

South Korea’s Unification Ministry was the first to figure out that the Iranian news agency may have confused Kims. The report said that a “North Korean leader” would attend.

North Korea routinely sends Kim Yong Nam, the 84-year-old president of the Supreme People’s Assembly Presidium, overseas to meet important people. He went to the last Non-Aligned Movement Summit, which was in Egypt in 2009, and he traveled to Laos and Vietnam earlier this month.

South Korea’s embassy in Tehran, Yonhap reported, learned late Wednesday that Iranian officials said Kim Jong Eun was not going to be at next week’s summit.

North Korea’s news agency, of course, says nothing about the travels of its leaders until they’ve arrived wherever they’re going. And for a long time, it didn’t say anything until they arrived back home.