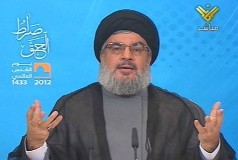 Iran’s response to an attack by Israel would be “huge,” Hezbollah’s Secretary-General Hassan Nasrallah said, reacting to warnings by Israeli leaders that time is running out for a diplomatic solution to the Islamic Republic’s atomic work.

A strike by Israel would give Iran the “golden opportunity” it has been seeking for years, Nasrallah said today in a speech relayed to supporters in southern Beirut.

Israel would have attacked Iran’s nuclear facilities a long time ago had the Persian Gulf country been weak, Nasrallah told supporters marking Quds Day, or Jerusalem Day. The late Ayatollah Ruhollah Khomeini, founder of the Islamic Republic of Iran, designated the last Friday of the Muslim fasting month of Ramadan for that occasion.

“Iran is powerful and courageous,” Nasrallah said, adding that he and the Israelis know Iran’s response to any assault would be “huge and lightning.”

Israel says Iran is working to develop an atomic weapon and considers its enemy’s nuclear work to be an existential threat. Iran says its program is peaceful.

Lebanon-based Hezbollah is a militant Islamist group with close ties to Iran and is classified as a terrorist organization by the U.S. The group, which is also backed by Syria, fought a month-long war with Israel in 2006. Nasrallah said any future war with Israel would be more painful to the Israelis than the 2006 conflict.

“When our country is attacked, we won’t take permission from anyone,” he said. “War with Lebanon is going to be very, very costly.”

Separately, the U.S. Embassy in Beirut warned its citizens today of “an increased possibility of attacks” in Lebanon, including abductions and the potential for an upsurge in violence. The warning came after Saudi Arabia, Bahrain, Kuwait, the U.A.E. and Qatar warned their citizens to leave Lebanon amid kidnapping threats.

Nasrallah distanced his organization from the recent spree of abductions, saying they are “out of Hezbollah’s control.”

He said Hezbollah has identified some targets in Israel that it can reach with just a small number of missiles that are already in place and inflict “tens of thousands of Israeli deaths.”

“At any stage of the war, we will not hesitate to use these missiles against these targets and the Israelis should know that the cost of aggression against Lebanon will be high and cannot be compared to the cost of the 2006 war,” he said.

While Hezbollah can’t destroy Israel, it can turn the lives of millions of Israelis into “real hell,” Nasrallah said. “We can change the face of Israel.”