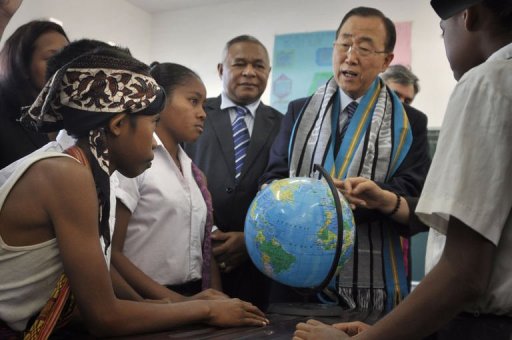 WASHINGTON — The United States said Thursday that it told Secretary General Ban Ki-moon that an upcoming summit in Iran sent a “strange signal” after Tehran reported that the UN chief would attend.

Iranian state media has said that the UN chief will visit Tehran for an August 30-31 summit of the Non-Aligned Movement, a group of 120 countries set up during the Cold War to reject alliances with both Washington and Moscow.

US State Department spokeswoman Victoria Nuland stopped short of urging Ban not to attend but said the United States considers Iran “an inappropriate place for this meeting.”

“The fact that the meeting is happening in a country that’s in violation of so many of its international obligations and posing a threat to neighbors… sends a very strange signal with regard to support for the international order,” Nuland told reporters.

The United Nations has not confirmed Ban’s travel plans. If Ban goes ahead with the trip, the United States hopes he will “use the visit to make the point about our broad concern as an international community,” Nuland said.

Nuland was referring to UN Security Council resolutions that have imposed sanctions on Iran for not halting sensitive uranium enrichment work.

The clerical regime says that the enrichment is for civilian energy, but Israel and some Western officials believe that Iran is seeking a nuclear bomb.

Israeli Prime Minister Benjamin Netanyahu, who has not ruled out a military strike on Iran, said last week that he told Ban by telephone that a visit to Tehran would be “a big mistake.”

US President Barack Obama took office in 2009 offering dialogue with Iran to resolve the nuclear row and other tensions. But after initial frustrations and calls by Israel for tougher action, Obama has emphasized pressure on Iran and championed punishing sanctions.