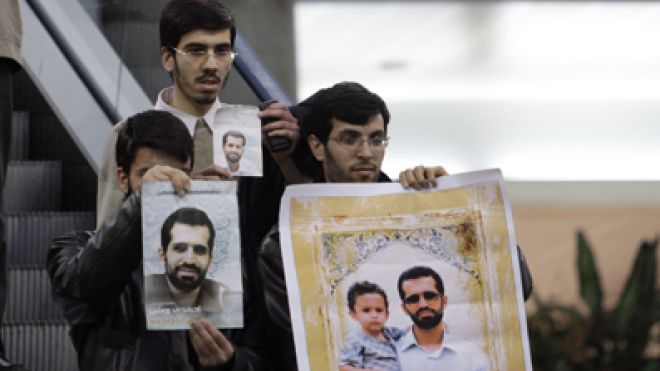 Families of Iran’s slain nuclear scientists have filed a lawsuit against Israel, the U.S. and Britain accusing them of involvement in the assassination of their loved ones.

Rahim Ahmadi Roshan, father of Mostafa Ahmadi Roshan, the slain chemistry expert and a director of the Natanz uranium enrichment facility in central Iran, told a press conference in Tehran Wednesday that the families have demanded Iran’s judiciary to pursue their complaint through international bodies and bring those behind the killings to justice.

“We’ve filed an indictment against the Zionist regime and the arrogant powers,” Roshan told reporters.”(The judiciary) is to pursue this case with the relevant international bodies.”

Iran’s state television broadcast purported confessions earlier this month by 14 suspects in connection with the killing of five nuclear scientists since 2010.

The TV also showed pictures from a military garrison it said was a training camp outside Tel Aviv in Israel. It said the suspects took courses there, including how to place magnetic bombs on cars — the method used in the killing of the scientists.

The suspects also acknowledged in the purported confessions that they received training in Israel.

Iran says the attacks are part of a covert campaign by Israel and the West to sabotage its nuclear program, which the U.S. and its allies suspect is aimed at producing nuclear weapons. Iran denies that.

Iran has blamed Israel’s Mossad as well as the CIA and Britain’s MI6 for the assassinations, with support from some of Iran’s neighbors. The U.S. and Britain have denied involvement in the slayings. Israel has not commented.

“Through this complaint, we declare to the world that actions of arrogant governments, led by the U.S., Britain and the occupying Zionist regime, in assassinating nuclear scientists and elites is against human principles,” according to a statement read out by Mansoureh Karami, wife of slain Tehran University physics professor Masoud Ali Mohammadi.

“While filing our complaint and announcing our protest, we resolutely declare that not only will such disgraceful acts not prevent the advancement of the children of this land in science, it will cause them to take more effective steps with greater determination,” she said.

In May, Iran hanged Majid Jamali Fashi, 24, who was sentenced to death for the 2010 killing of Ali Mohammadi. Fashi, who said in televised confessions that he was recruited by Mossad, was convicted last August.

Officials say the campaign against Iran includes the abduction of Iranian scientists, the sale of faulty equipment and the planting of a destructive computer worm known as Stuxnet, which briefly brought Iran’s uranium enrichment activity to a halt in 2010.