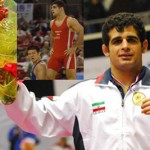 Rezaei was 16th at the Beijing Games in 2008, but a number of upsets helped clear the way for him and Totrov to meet in the finals.

The Iran Project is not responsible for the content if quoted articles.