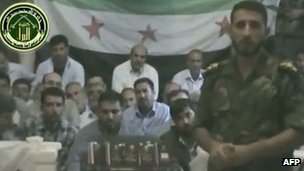 The Iranian foreign minister says a group of 48 Iranians abducted by rebels in Syria include a number of retired Revolutionary Guards and soldiers.

Ali Akbar Salehi said they no longer had any military role and that they had been in Damascus for a pilgrimage when they were seized on Saturday.

Fighting continues in Syria’s biggest city, Aleppo, with an unconfirmed report that rebels have pulled back.

New evidence has emerged of heavy weapons use in the city.

The rebels who are holding the Iranians accuse them of carrying out reconnaissance on behalf of the Syrian army.

Iran has asked the UN and Turkey for help in securing their release.

“A number of the [hostages] are retired members of the Guards and the army,” Mr Salehi was quoted as saying by the Iranian Students’ News Agency as he flew back from Turkey.

“Some others were from other ministries.”

Meanwhile, activists said shellfire had killed at least 12 people in Aleppo on Wednesday. The report could not be verified independently.

Reuters news agency journalists who tried to enter Aleppo’s Salaheddine district on Wednesday found that a checkpoint manned by rebel fighters this week had disappeared.

They were told by a lone rebel fighter that the rebels had abandoned their positions there.

“We have retreated, get out of here,” the fighter yelled.

Explosions could be heard as incoming gunfire hit buildings in the area, the Reuters crew said.

Separately, Amnesty International has warned that new satellite images show increased use of heavy weapons on residential areas in the Aleppo area.

Images reveal at least 600 probable artillery impact craters alone in the nearby town of Anadan, it said.

It said any attacks against civilians would be documented so that those responsible could be held accountable.