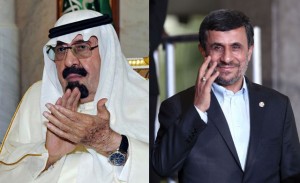 Why has the Saudi king invited Ahmadinejad to the Syria summit?

The visit of the Iranian president, Mahmoud Ahmadinejad, to Saudi Arabia comes at a crucial time for the conflict in Syria. Few observers can be optimistic about the chances for diplomacy, with the Annan plan abandoned and the quieter efforts at reaching a US-Russia deal stalled.

Most analysts predict that Syria’s uprising against dictatorship – which began as a peaceful cross-sectarian movement calling for basic freedoms – will increasingly mutate into a sectarian civil war. Much of the western policy debate is moving on to the risks of prolonged state failure in a post-Assad future.

Within the Arab world, the debate over Syria is increasingly becoming polarised along ideological and sectarian lines, as the country’s strategic importance to the region’s great powers seems to be obscuring the commonalities between the basic demands of the Syrian protesters and their counterparts in other Arab countries. Any efforts to draw back from the brink – and to stop the Syrian uprising against dictatorship being derailed by a sectarian regional proxy war – deserve attention.

Ahmadinejad’s visit, which an aide has said will go ahead, is a rare one. He last visited Saudi Arabia in 2007, at a time when the Gulf states were trying so hard to reach out to Iran that Qatar even invited him to join in the annual summit of the Gulf Co-operation Council (the regional organisation representing the six Gulf Arab monarchies, which was founded in 1981 partly in response to the perceived threat of the Iranian revolution).

Although there is a long history of rivalry and competition between the Gulf Arab countries and Iran, relations have not always been so conflicted. Back in 2008, Ahmadinejad visited Bahrain and signed an agreement for Iran to supply Bahrain with natural gas. The deal, which seems almost unthinkable today, never materialised.

By contrast, Ahmadinejad’s most recent foray to the other side of the Gulf was in April, when he toured Abu Musa, an island occupied by Iran but claimed by the UAE. This prompted fury in the Gulf monarchies, where rulers saw it as a sign of Iranian expansionist tendencies, and were frustrated by the lack of reaction from their western allies (who were preparing for talks with Iran over the nuclear issue and who are not deeply engaged on the islands issue).

It is in Syria that the Saudi-Iranian confrontation has become the most pronounced and dangerous, but the two are competing for influence in the wider region. They back rival camps in Iraq, Lebanon, and to some extent Yemen and the Palestinian territories (though Hamas has always had some support in the Gulf and is now distancing itself from both Iran and Syria). They are also at odds over the treatment of Shia protesters in Bahrain and Saudi Arabia’s own eastern province. Saudi officials routinely suggest that Iran is fomenting the protests in both cases.

For its part, Iran’s interests seem to be best served by giving only moral support to the protesters, so it can sit back and watch its rivals challenged from within, without the kind of direct involvement that could spark retaliation.

Both Iran and Saudi Arabia are effective exploiters of “soft power”, making use of their various media channels and religious networks to try to discredit the other.

One of the disadvantages of this approach is that it is never quite clear how centralised the control of foreign policy really is. Another problem is that the Middle Eastern media are becoming increasingly sectarian – a trend that is worrying many people in the ethnically and religiously diverse countries of the Gulf.

Now, with the collapse of Kofi Annan’s mission to Syria, the Gulf Arab monarchies are becoming more open about their support for the Syrian opposition, including the armed Free Syrian Army. Saudi Arabia has hosted a variety of Syrian opposition visitors, from members of the Syrian Muslim Brotherhood to Assad’s estranged uncle, Rifaat al-Assad and Manaf Tlass, a senior Syrian military officer who defected just a few weeks ago.

The latter visitors illustrate that Saudi Arabia is not only supporting the Islamist opposition; it has its own concerns about the rising regional influence of the Muslim Brotherhood, whose focus on electoral politics represents a major challenge to the Saudi model of partnership between clerics and hereditary rulers.

The UAE is also pursuing a delicate balancing act, as it is home to a number of Syrian National Council activists – who recently announced the defection of the Syrian ambassador to the UAE – but is extremely wary of the role the Muslim Brotherhood could play in its own territory, and is investigating around 50 imprisoned Islamist political activists who are accused of conspiring with foreign organisations.

Even before the Annan mission collapsed, the Saudi and UAE foreign ministers were expressing extreme frustration with what they see as international inaction over Syria. Saudi Arabia has never seemed particularly convinced by western diplomatic efforts; Kofi Annan did not visit Riyadh during his Syria mediation efforts, and neither Saudi Arabia nor Iran was included in the last “Friends of Syria” meeting.

Most indications point to further conflict rather than a diplomatic resolution. But in the highly personalised realm of Saudi politics, a personal invitation from the king is symbolically important.

In Lebanon, in 2008 and 2009, the confrontation between the Saudi-backed 14 March alliance and the Iranian-backed 8 March alliance occasionally looked like it could lead to renewed civil conflict. But there, the rival factions stepped back from the brink, negotiating power-sharing agreements before and after the 2009 elections.

This would be far harder to achieve in Syria, with its daily bloodshed and its asymmetry of forces, but the cost of conflict is high enough for any remaining diplomatic options to be worth exploring.