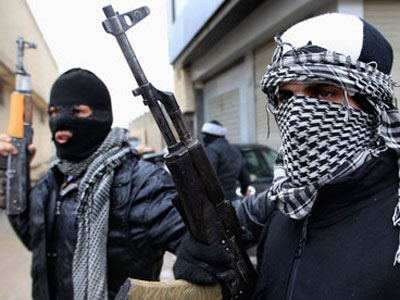 (Reuters) – Syrian rebels said three Iranian captives were killed on Monday during an air attack in Damascus province by government forces, and threatened to kill the remaining Iranians in their custody unless the army stopped its attack.

“They were killed when the aircraft attacked. One of the houses they were in collapsed over their heads,” rebel spokesman Moutassam al-Ahmad told Reuters. “We will kill the rest if the army does not stop its assault. They have one hour.”

Ahmad said that a number of rebels were also killed in the attack. “Our losses are bigger than theirs.”

Fighters from the al-Baraa brigade of the rebel Free Syrian Army kidnapped 48 Iranians on Saturday on suspicion of being military personnel, but Tehran says they are pilgrims.

The 48 Iranians, planning to visit a shrine on the outskirts of Damascus of particular significance to Shi’ite Muslims, were abducted on the road from the airport.

“We have documents that they are involved with the Revolutionary Guards,” Ahmad said.

The majority of those revolting against Assad are Sunni Muslim, while Assad comes from the minority Alawite sect, an offshoot of Shi’ite Islam which is the main religion of Iran.

Several groups of Iranians have been abducted in Syria since the uprising began in March 2011.

Five Iranian engineers were kidnapped in the flashpoint city of Homs in December. Iranian media said they had all been released by last month. A group of pilgrims were snatched in January and another in February. Most have been freed, according to Iranian media.