Iran to insure its own oil tankers

In an effort to counter European Union sanctions banning insurance on shipments of Iranian oil, Iran government has allocated billions of dollars to insure its oil tankers itself, an official from Iran’s insurance industry said. 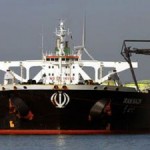 According to the official, the government has already transferred about 10 percent of the sum to Iran’s central insurance company.

Japan had completely halted Iranian crude imports in July because of the lack of cover, but earlier this month industry sources said Japanese insurers were expanding their maritime coverage to allow more domestic tankers to transport Iranian crude.