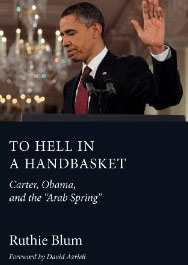 A new book looks at Carter, Iran, Obama and the Arab Spring

This article was written by Jennifer Rubin for The Washington Post blogs on July 23, 2012. Jennifer Rubin writes the Right Turn blog for The Post, offering reported opinion from a conservative perspective.

Both the Obama administration and outside foreign policy experts are struggling to understand and predict the course of the Arab Spring. Much of the optimism that greeted the authoritarian regimes’ downfall has turned to grave concern that the regimes that are following are more anti-West in outlook and are falling within the grip of Islamic fundamentalists. Is the Arab Spring good or bad? Do we have the ability to influence events in those countries?

I have argued that we lack some systematic thinking and thoughtful debate about these issues. It is therefore fortunate to have a new book, which certainly can get the discussion rolling. Ruthie Blum, a former editor at the Jerusalem Post who immigrated to Israel in 1977, has written a book, “To Hell in a Handbasket: Carter, Obama and the ‘Arab Spring.’ ” The title and Blum’s other writings should give you a clue that she’s not enamored with the way things have progressed in the region. But what makes it gripping and unusual is that the meat of the book — and the original focus before the Arab revolts — is a detailed account of the Iranian revolution of 1979 and the hostage crisis that continued for 444 days.

If your memory has dimmed, this book will certainly refresh it. Events more than thirty years ago now seem eerily familiar — a U.S.president’s misdiagnosis of Iranian motives, a failure to project strength and resolve, a lack of appreciation for the ferocity of Islamic fundamentalists and the disastrous assumption that a more accommodating stance would put us in the good graces of a radical regime.

Blum agreed to a Q and A via e-mail to discuss the book:

You began the book before the Arab Spring. How did that change how you thought about events in 1979-1980?

It reinforced what I already thought — which is that the West in general, and the United States in particular, have to cultivate allies and punish enemies. It’s so self-evident that it’s embarrassing to have to keep reiterating it.

If President Carter had been more forceful early in the crisis (such as threatening military action) do you think the crisis would have dragged on?

There is no way the hostage crisis would have dragged on had Carter taken swift action. The fact is that, in the planning stages of the embassy takeover, many of the activists — among them Mahmoud Ahmadinejad — considered occupying the Soviet Embassy, but immediately realized that if they were to do this, they would all be slaughtered in seconds. So they thought better of it.

Was Carter responsible for the rescue failure since he delayed past the optimal time of year for the raid?

Largely, yes. By the time he got around to giving the OK, there were far fewer hours of darkness in which to maneuver. And even if there hadn’t been issues with the helicopters, the delay in itself constituted affirmation to the hostage-takers that they were in charge, and had the upper hand in the negotiations . . . which, of course, they did.

The hostages ordeal dragged on for well over a year and Carter never mounted a successful rescue operation. He was wary how the hostages would react to him in Germany after their release, but to his relief they were far more cordial than he expected. Why do you think that was?

Imagine what it was like for them to have been incarcerated and terrorized for 15 full months, never really sure that they would get out alive. Then, finally, they arrive safely in Germany, and they are greeted — in person — by the president himself! Even though Ronald Reagan had just been inaugurated, as far as the hostages were concerned, Carter was the chief. Furthermore, the Foreign Service people among them, as opposed to the Marines, all had been Carter supporters, and people who believed in diplomacy, rather than military might, for solving all crises.

But mainly, I think it was because they were thrilled to be going home. I probably would have hugged Carter myself under those circumstances.

Obama’s conservative critics believe he emboldened the mullahs early in his term with what the regime perceived as signs of weakness, but do you think his rhetoric impacted other uprisings?

There is no doubt that Obama’s behavior, from the minute he took office, indicated to radical Islamists that this was their moment. And when they saw how he abandoned the Iranian people when they took to the streets after Ahmadinejad’s reelection (which they considered stolen) — and how he subsequently abandoned a long-time American ally (Tunisian President Zine el-Abidine Ben-Ali) as soon as riots broke out in Tunisia — they were buoyed into taking over the whole Middle East.

Arab Spring observers say the old regimes were brittle and couldn’t survive. Now some think we have something worse. Was there an alternative?

The alternative was always there: Cultivating the pro-Western elements in closed societies, while maintaining a belief in American supremacy and superiority. This is not a perfect solution, as we can see from what has become of Russia. But it is far preferable to relinquishing power to Third World despots.

Are there genuinely secular reformists in the Middle East?

There are, but they are too few and too silent.

Do you think Obama could have saved Mubarak?

Even if he couldn’t have saved Mubarak, he didn’t have to embrace the Muslim Brotherhood.

Obama is far worse as president than Carter was, though Carter’s post-presidency is equally bad. Whereas Carter did not have a real precedent for what happened in Iran, Obama did.