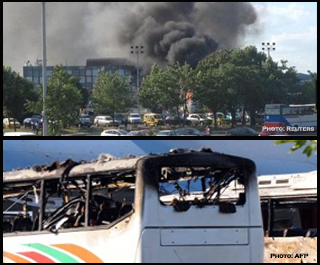 Tehran was behind a terrorist attack on an Israeli tourist bus in Bulgaria that killed up to seven people at Burgas airport on Wednesday, Benjamin Netanyahu, Israel’s prime minister claimed. 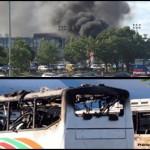 Claiming that “all the signs lead to Iran”, Israel’s prime minister warned on Wednesday of “retaliatory measures targeting the country,” Haaretz reported.

Falsely accusing Iran to attack Israelis in Thailand, India, Georgia, Kenya, Cyprus and other places in the past few months, Benjamin Netanyahu said that this is an Iranian terror attack that is spreading throughout the entire world.

It had already been the case that the Israeli government was informed of the attacks on its nationals in other countries but has not prevented them to condemn Iran.

While, Bulgaria’s interior minister said on Thursday that based on the results of the preliminary researches, the suspected attacker on the Bulgaria bus carrying Israeli tourists was holding a driver’s license issued in the United States.

But, some of the News agencies around the world just briefly mentioned Bulgaria’s interior minister’s saying about the suspected attacker, and focused on Netanyahu claims of Tehran’s links to Bulgaria blast.

Iran’s state TV is rejecting accusations of Tehran’s involvement in the bomb attack on Israeli bus in Bulgaria, calling the claims by Israeli Prime Minister Benjamin Netanyahu and others “ridiculous” and “sensational.”

It also described the Israeli charges as attempts to discredit Iran.