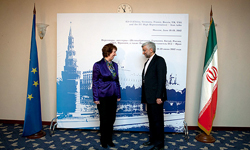 The latest round of talks on Iran’s nuclear program has ended with no clear sign of  breakthrough.

The only clear outcome of the long-stalled talks was to continue talks but not a high-level one, just a technical follow-up meeting in Istanbul on July 3.

No further negotiations have been scheduled — only an experts’ session early next month to go over technical details, followed by contacts between the deputies and chiefs of the delegations, Washington Post said.

For its part, Iran appeared to welcome the announcement of the low-level experts’ meeting. But no one expects  any great breakthroughs of the following talks.

On the opening day, the world powers repeated the three specific demands that they made of Iran at the last round of talks held a month ago: stop the enrichment of uranium to 20%; close a heavily-fortified enrichment facility near the city of Qom; and export its stockpile of 20% enriched uranium.

These points include a recognition of Iran’s right to enrich uranium, a lifting of sanctions and a discussion of regional issues including Syria.

There appeared to be little immediate overlap between the offers or demands made by both sides. As European Union foreign policy chief Catherine Ashton said after two days of talks in Moscow that it remains clear that there are significant gaps between the substances of the two positions.

Ashton, who led a six-power delegation at the talks, said “the choice is Iran’s. We expect Iran to decide whether it is willing to make diplomacy work to focus on concrete confidence-building steps, and to address the concerns of the international community,” France 24 reported.

Speaking afterward, Saeed Jalili, the lead Iranian negotiator, told a separate news conference that he hoped a date would be agreed for new political talks after the Istanbul meeting, which will address unspecified technical details.

He said the Moscow talks had been more serious and realistic than previous negotiations but also condemned U.N. resolutions punishing Iran over its nuclear programme and reiterated that Tehran’s aim was not to secure an atomic arsenal.

“Moving along the constructive path of negotiations and cooperation can bring about a future success of talks,” he said.