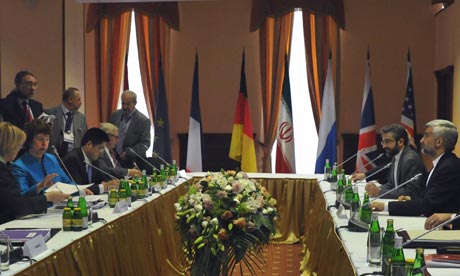 Iran nuclear negotiations: The dawn of the zombie talks

This article was written by Julian Borger, for guardian.co.uk on Wednesday, June 20, 2012 . Julian Borger is the Guardian’s diplomatic editor. He was previously a correspondent in the US, the Middle East, eastern Europe and the Balkans.

After Moscow, there is no discernible life left in this diplomatic process but it has to be kept going in the hope of a miracle and because the alternative is so grim.

The diplomatic process to resolve the Iranian nuclear crisis was always a very frail patient, bustled from one clinic to another around the world, from Istanbul in April to Baghdad in May in the hope of imbuing it with vigour. Yesterday in Moscow, by any reasonable assessment, it stopped showing signs of life.

However, because this was a fiercely proud Russian-run hospital, and because the global implications of declaring diplomacy dead are so grave, it is being made to look like it is staggering on. If it is to officially keel over, the Russians made clear, let it be somewhere else, like Istanbul.

So it is that a technical working group is to assemble in the Turkish city on July 3 to pore over the papers presented in Moscow ostensibly lest some detail of nuclear science had been overlooked by the diplomats. This is of course nonsense. There were plenty of experts on hand in Moscow and these issues have been studied by both sides in depth for years. Everyone involved is well aware of the science. They just don’t agree.

But it is a worthwhile nonsense. It is an excuse to keep contacts alive and the door open to a change of mind which could be dressed up as a working group breakthrough. And as long as there is some diplomatic engagement it makes it that small bit harder for Israel to mount military action. As former IDF brigadier general, Michael Herzog, put it, talks represent a “complication” in Israeli decision-making on a strike.

Iran’s chief negotiator, Saeed Jalili, hailed the working group wheeze as a diplomatic triumph last night, welcoming “the fact that the other side has come to agree with us although it took them [so] long.”

In fact Jalili wanted at least three working groups, with others dealing with politics and legal issues. Catherine Ashton, the EU foreign policy chief acting on behalf of the six powers at the talks, argued that the legal issues had been looked at exhaustively, and the political decisions, by their nature, had to be taken at a senior level, which is what Istanbul, Baghdad and Moscow were supposed to be about.

There seems little doubt that the Iranian side is enamored of working groups because they use up time. The hawks in Israel, the US and elsewhere, see this as proof that Tehran is stalling while it makes a bomb, but there is little evidence that a concerted effort to make weapons is underway.

However, as time goes by, Iran’s centrifuges are spinning and more fissile facts on the ground are being created in the form of low-enriched and 20%-enriched uranium. Stalling is also useful for a regime that is incapable of making a strategic decision because it is weak and paranoid.

In many ways what went on in Moscow, and in Baghdad last month, was an illusion of negotiations. To give an example, a member of the Iranian delegation came through the lobby of the talks venue, a Moscow hotel, and lightened the tedium of the journalists slumped on the sofas by suggesting that the Russians had brought new ideas to the table which could close the gap between the sides. It turned out the ‘ideas’ were an article by Vladimir Putin written during the presidential campaign in February in which he suggested Iran should be allowed to enrich uranium. In the negotiating room, the Russians quickly dismissed the article presented by the Iranians, saying that could be the end-point of negotiations not an opening gambit.

In another example, in Jalili’ PowerPoint presentation on Monday, he had a slide on confidence-building measures which referred to the international community providing fuel plates for the Tehran research reactor which makes medical isotopes. This was a hopeful sign as the six powers had offered the fuel as part of a deal for suspension of 20% uranium production. However, when the negotiators finally got hold of the paper version of the presentation yesterday, it appeared that Jalili was presenting the international community’s opportunity to participate in the reactor’s operation as an Iranian concession, for which Tehran wanted payment in sanctions relief.

Much of the rest of the two-day talks were taken up by lengthy screeds on history delivered by Jalili. He had been asked to clarify Iran’s negotiating position in Moscow and in a sense he did, going into intricate detail. It was like a history buff who, on being politely told his monograph could be a little sharper, had read out the entire university thesis on which it was based. It did not get any clearer; there was just much more of it.

The interminable lecturing is likely to be symptom of a lack of trust. On one level, the Tehran regime seems to suspect that if it got involved in bargaining any offer it makes would be pocketed by the other side with nothing in return, and to a certain extent the mistrust here is mutual. But there is also deep lack of trust inside Tehran, where no one wants to be seen as giving any part of the great national nuclear achievement away for fear of being knifed in the back for it at some later date. That is what happened to President Mahmoud Ahmadinejad, who was pilloried – even by the ‘reformists’ – for tentatively agreeing to a uranium swap deal in 2009.

The deal on the table in Baghdad and Moscow is considerably more advantageous for Iran. Under the Ahmadinejad version, Iran would give up some of its low-enriched uranium (LEU) stockpile in return for fuel plates for the Tehran reactor. In the new deal, it keeps all its LEU and just gives up its 150 kg or so of 20%-enriched fuel. As well as fuel plates it gets nuclear safety help and much needed spare parts for planes.

That said, the six powers may have missed an opportunity by not offering some sanctions relief as part of the deal. The EU oil embargo, due to take effect on July 1, is being imposed largely in response to an IAEA report last November spelling out evidence of past weapons activity, which all six nations had known about for years anyway. Both the Arms Control Association and National Iranian American council in Washington are both arguing today for the sanctions to be on the table.

The Europeans are now reluctant to make such an offer in part because it would be seen as rewarding intransigence, and because they believe the pressure is working. The head of NIAC, Trita Parsi disagrees. He says:

If a compromise is not vigorously pursued, war will become far more likely. As Western countries escalate economic warfare against Iran, Iran is likely to escalate in kind, exacerbating the already perilous spiral towards conflict. This begs an important question: Are we willing to risk war for the sake of never lifting any sanctions?

The former IAEA chief inspector, Olli Heinonen also thinks the Iranian response will be to up the stakes “to pepper the talks to come”:

I bet that it will be more enriched uranium, and perhaps more 20% uranium together with more ‘good news on further nuclear achievements. This may come with some harder statements like the Iranian plans of using uranium for nuclear submarines. That sends two messages: uranium enrichment continues, and that future submarines are not only for the Hormuz. You do need nuclear submarines to defend home waters; they are to be used far away from home.

Asked if he was frustrated, a senior western diplomat at the Moscow talks said he did not use the word. Sitting though such negotiations is all part of he is paid to do, he said. It is what diplomacy is all about. It often seems absurd, time-consuming and futile, and it costs a lot of time and resources. But to paraphrase something often said about education and ignorance, if you think diplomacy is costly, try war.