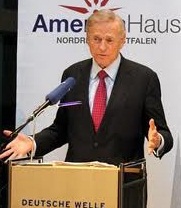 Deutsche Welle quoted Former ambassador of Israel to Germany, Avi Primor as saying, “The problem is not the nuclear weapons, it’s the hands they are in. In the hands of a democratic or at least an open government, these weapons would no longer be dangerous.”

The remarks are expressed by the ambassador of the country that is widely believed to possess the world’s fifth nuclear weapons power. Israel’s atomic arsenal is still closed to neutral foreign observers and even its friends. It persistently refuses to sign the Non-Proliferation Treaty (NPT) as well. Mr. Primor made the statements to give reasons to support changing the current regime in Iran. In an implicit comparison between Israel and Iran, he has considered Israel is qualified to have nuclear weapons but Iran because of not having democratic or an open government doesn’t have the right to access even peaceful nuclear energy.

In reply to Israeli diplomat speech, it is necessary to discuss the history of Israel as a democratic and open government to see whether it is qualified to have nuclear weapons or not.

1) One of the factors that determines the qualification of a country to possess nuclear weapons is its interaction with neighboring countries and other ones. To evaluate Israel’s relations with its neighbors, it should be considered that it had prepared to use nuclear weapons in its multiple wars against Arabs. When the incumbent Israeli prime minister during the 1973 war that Israel was surprised by Arab armies, threatened US president in a telegraph that if  “the foundations of the Solomon’s Temple” are on the verge of collapse, Israel would use nuclear weapons. The threat was taken seriously by US quick reaction in providing outright military aid to Israel via Lisbon. It shows that Israel has intended to use nuclear weapons even in conflict with its neighbors and its political military commanders do not hesitate to use unconventional weapons.

2) On the other side, the state that possesses nuclear weapons refrains from threatening other states, with the knowledge that it has such a powerful weapon to defend its territory. But Israel, as a newly established state, has attacked its neighbors under several pretexts; moreover it never abstains from applying verbal threats. Media are replete with verbal and open threats of Israel that considers its right to attack Iran, Lebanon and Syria. Now the question is whether such an aggressor country has the right to have nuclear weapons?

3) Another factor that qualifies a country to possess nuclear weapons is its military doctrine. While Iran has openly denied applying weapons of mass destruction, Israel has focused its doctrine on pre-emptive reaction with the use of any kind of weapon. Such a country is not eligible to have even archery, let alone the nuclear missiles.

4) Allowing apparently neutral inspection organizations like IAEA probe of nuclear facilities is another factor that authorizes a country to have nuclear weapons to defend its territory. Israel not only has not accepted such inspections, but when it has to show the Dimona nuclear facilities to American inspectors, with the force of US, its main supporter, it has shown as few sections as possible. While security agencies’ reports indicate that there are at least 6 other nuclear facilities in Israel, some of them are highly secret and tactical nuclear weapons are built in them, too.

It can be concluded that claims made by former Israeli ambassador in Germany are more appropriate to deceive only German officials, to justify themselves that recently delivered the forth Dolphin submarines armed with nuclear missiles to Israel, not anyone else.