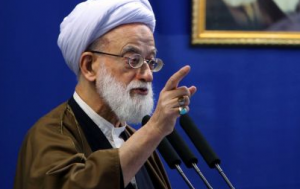 Citing the fatwa (religious decree) issued by Supreme Leader of Islamic Revolution Ayatollah Seyed Ali Khamenei prohibiting production and use of nuclear weapons, Mohammad Emami Kashani stressed that the Islamic republic of Iran is a faithful and honest establishment.

On February 22, Ayatollah Khamenei said the Islamic Republic considers the pursuit and possession of nuclear weapons “a grave sin” from every logical, religious and theoretical standpoint, Press TV reported.

He added that the Western countries’ charges about Iran seeking to build nuclear weapons simply “do not apply.”

Ayatollah Emami-Kashani urged the P5+1 to reciprocate Iran’s sincerity by avoiding stubbornness and being honest in the forthcoming negotiations with Iran in Baghdad.

A new round of talks between Tehran and the six world powers (P5+1) is scheduled for May 23 and will take place in Baghdad. The two sides will seek diplomatic ways to resolve Iran’s disputed nuclear program.