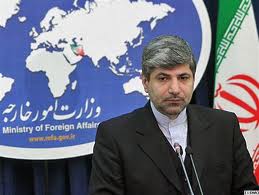 According to Fars, Iran’s Foreign Ministry Spokesman Ramin Mehmanparast told reporters in his

“We will, by no means, accept the irrelevant and ill-assessed statements of other states’ individuals on the trio islands,” Mehmanparast said, referring to some Persian Gulf Arab states’ support for the UAE’s baseless claims on the Iranian island.

Iran’s Foreign Ministry Spokesman categorically rejected the recent allegations that Tehran plotted to assassinate the Saudi ambassador to Cairo, and asked officials of the regional states to avoid comments which harm their own and the Muslim world’s interests.

He said that such allegations are merely raised by those countries which do not care for the Muslim world’s interests and only try to please the Zionist regime and its supporters.

IRNA reported, as to the latest developments in Syria, he called on foreign courtiers not to interfere in domestic affairs of that country.

Some evidences prove that certain states are not interested in establishment of peace and tranquility in Syria, said Mehmanparast, regretting that those countries try to arm opposition groups in order to fan the flames of the civil war.

Besides, Mehr added Foreign Ministry spokesperson  has expressed hope that the next round of talks between Iran and world powers would be based on interaction and cooperation.

In reply to a question about the fact that US most sophisticated stealth jet fighters, known as F-22 Raptors, have recently been deployed to Al Dhafra Air Base in the United Arab Emirates, Ramin Mehmanparast has advised regional countries not to provide outsiders with opportunities to increase their military presence in the region.

He said: “Such measures endanger the security of the region. Any dependence on extra-regional countries, be it in terms of forces or equipment, runs counter to (efforts meant to) maintain regional security, and the presence of foreign forces could threaten security in the strategic Persian Gulf region.”

In the following, Foreign Ministry added Iran will take the rotating chair of the Non-Aligned Movement in late August for a three-year term, IRIB stated.

Mehmanparast expressed hope a new order could be established in the world by the NAM members’ collective effort under which injustice and double standards are removed and the rights of all nations are respected.

Furthermore, Press TV noted the volume of trade between Tehran and Baghdad will reach a figure between 12 and 15 billion dollars in the current Iranian year (started March 20).