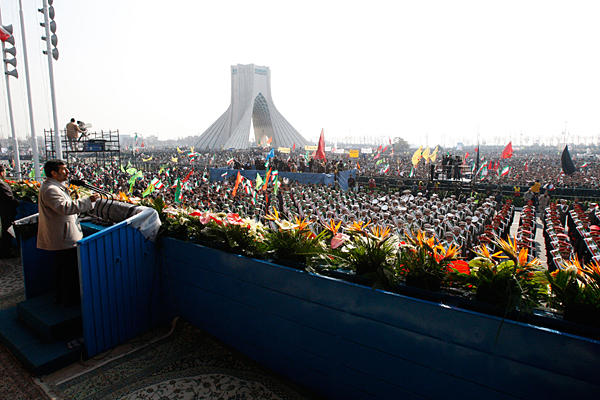 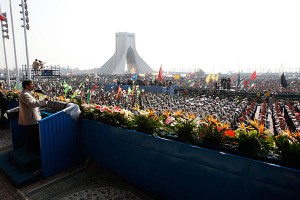 Iranian President Mahmoud Ahmadinejad said “Iran will soon announce very important nuclear achievements” when
He was speaking at a rally in Tehran to mark the 33rd anniversary of the Islamic revolution to a crowd at Tehran’s Azadi (freedom) Square broadcast on state television.

He stated Iran would never give up its uranium enrichment program.

The West claimed Tehran may be trying to develop nuclear weapons, while they have never presented any corroborative evidence to substantiate their allegations. Though, Iran has long maintained that its nuclear program is solely for civilian energy production.

Tensions hit a boiling point weeks ago when Iran conducted military exercises in the Persian Gulf after threatening to close the Strait of Hormuz, a crucial shipping lane for oil.

Moreover in earlier this week, US president Barack Obama ordered to freeze Iranian government assets, including transactions by the Iranian Central Bank, in tightened sanctions over Tehran’s nuclear program.

As Iran’s Vice President for Parliamentary says “Enemy sanctions against Iran will have no effect on the country’s budget for 1391 [according to the Persian calendar year] (beginning March 20, 2012)”, Press TV reported.

The presence of Hamas prime minister from Gaza, Ismail Haniyeh, was the highlight point in this anniversary.

According to Foxnews, before Ahmadinejad spoke Saturday, visiting Hamas prime minister from Gaza, Ismail Haniyeh, also addressed the crowd, congratulating Iranians on the 1979 anniversary and vowing that his militant Palestinian group would never recognize Iran’s and Hamas’ archenemy, Israel.

Besides at the Tehran rally, Iran displayed a real-size model of the U.S. drone RQ-170 Sentinel, captured by Iran in December near the border with Afghanistan. Iran has touted the drone’s capture as one of its successes against the West. The state TV called the drone is a “symbol of power” of the Iranian armed forces “against the global arrogance” of the U.S.

Meanwhile Mr Ahmadinejad told the cheering crowd that Iran has broken the “idol” of the Holocaust, which underpins the creation of the Israeli state and US hegemony.

Based on the authenticated resources, 278 foreign correspondents of 33 countries attended to cover the 33rd anniversary of the Islamic revolution.