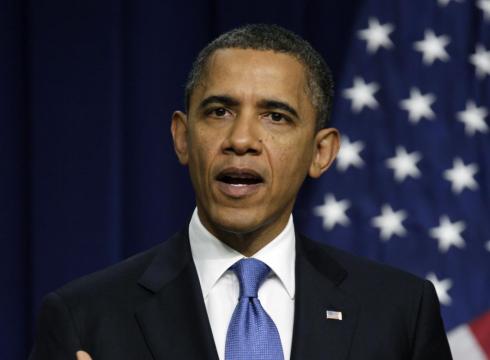 The United States threatened to prevent Iran from getting a nuclear weapon and will take no options off the table to achieve that goal,

U.S. President Barack Obama said in his State of the Union address on Tuesday.

Obama added: “But a peaceful resolution of this issue is still possible, and far better, and if Iran changes course and meets its obligations, it can rejoin the community of nations.”

Obama’s remarks come after the European Union foreign ministers reached an agreement in Brussels on January 23 to impose sanctions on oil imports from Iran over the country’s nuclear program as of July 1.

The United States and the European Union have stepped up sanctions targeting Iran’s oil and banking sector as part of efforts to force Iran to stop uranium enrichment, which they fear masks a drive to produce an atomic bomb.

Iran has categorically refuted the US-led allegations regarding its nuclear program, saying that as a signatory to the nuclear Non-Proliferation Treaty and a member of the International Atomic Energy Agency (IAEA), it is entitled to develop and acquire nuclear technology for peaceful purposes.

Iranian officials said Tuesday the latest Western sanctions will not work, and could even benefit Iran by leading to higher prices for Iranian crude.

Obama left out that the sanctions net has holes, because some of Iran’s large oil trading partners won’t go along. China, a major purchaser of Iran’s crude, isn’t part of the new sanctions and, together with Russia, stopped the United Nations from applying similarly tough penalties.